Gulliver was a fictional adventurer who discovered many fantastical lands such as Brobdingnag and Laputa. A novel was written about his escapades in 1726, and is still being sold as one of the classics today. Amaya Gaming designed a slot game around this famous adventurer and called it Gulliver’s Travels after the book. The slot has five reels and can be played on both desktop and mobile devices. The wagering range in the game is large to, making it a good one for players of all budgets. Coin values go from 0.01 and 0.1, with as much as 125 credits available to be played per spin.

Gulliver’s Travels is a very detailed game. Amaya have gone out of their way to create a slot that has not a single spare inch of blank space. This does mean that some of the animations and graphics get lost on a small screen though, so Gulliver’s Travels is best played on a tablet. The game is compatible with both https://mobilecasinoca.com/android/ and iOS.

The reels in Gulliver’s Travels are set in a town with lots of construction going on. Wooden scaffolding and wooden cranes are all over the show, even edging the reels themselves. The reels are black, but each symbols is in block form and takes up most of them. 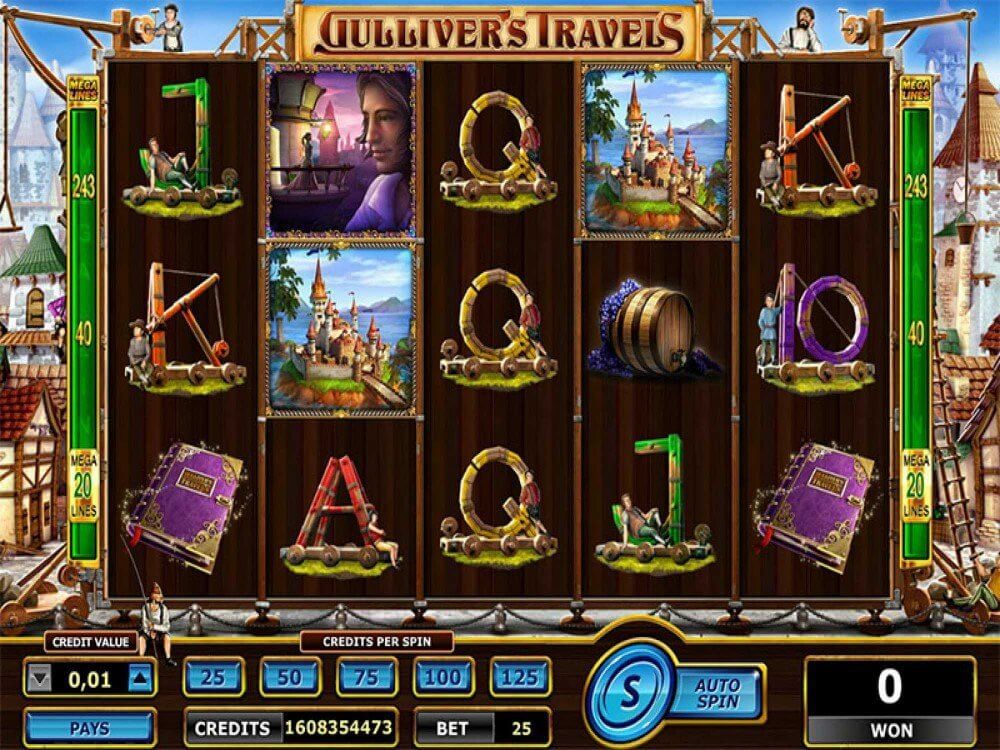 On his travels Gulliver ends up on an island called Lilliput. Unbeknown to him, this island is full of very little people called Lilliputens. These little people are understandable quite upset when a giant lands on their shores, and proceed to capture him and force him to do all sorts of things. Gulliver’s Travels the slot depicts this story with all of its symbols, even the base ones taken from a deck of cards. These have been intricately drawn with tiny wooden scaffoldings adorning each one. The high value symbols include a tied down Gulliver on a beach, Gulliver and a tiny Lilliputian princess, a castle, a purple book and a keg of wine.

This is a feature that has nothing to do with the story line, but creates many more winning combinations. Finding a Mega Lines symbol on reels one or five will lock that reel into place, granting you with free spins until the reels form a part of a winning combination. This will also increase the number of active paylines to forty. Two Mega lines symbols, on reels one and five will increase you paylines to 243.

The scatter symbol of Gulliver pulling a tiny ship can be found on reels one three and five, and three of them will trigger the bonus game. A second screen will give you a number of ships; you simply click them until you find three matching ones. This will determine the number of free spins that you now get. Both the Mega Lines and the Flip Out Feature are active during the free spins round, potentially granting you loads of wins.