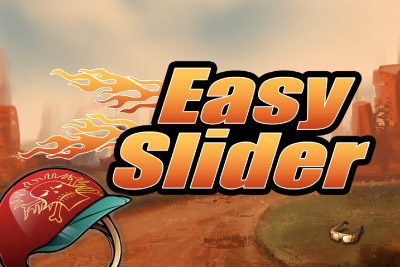 Easy Slider is a five reeled video slot with twenty five paylines, three rows of symbols at the screen, Slide-A-Wild function, the special wild and scatter symbols, the gambling feature, additional payoff multipliers, free spins and other interesting gaming options. Thematically, Easy Slider slot machine is set on the open highways of a desert scene, with red and rocky looking mountains as the backdrop, with just the sound of a motorcycle engine for company.

Easy Slider is a NextGen software video slot machine. The minimum coin denomination is 0.01 coins and it ranges up to 2 coins. With 25 paylines this means the maximum bet is 50 coins per spin. The highly regarded NextGen software has a pay-out rate, or return to player, of between 95.156% and 95.601%. This is relatively high, and with Easy Slider being considered a medium variation slot machine, the chances of some reasonable winnings are fairly high.

Symbols on the Reels

Easy Slider video slots has the usual, and in this case colourful card symbols bedecking its reels. There are four main symbols in this game, and they form the base game characters; sunglasses, a devil patch, a helmet and a biker surrounded by fire.

The special symbols available in Easy Slider video slots are a Wild symbol, the lady biker and a Scatter symbol, a burning motorbike wheel. The Wild symbol, as is normal, can not only form wins on its own, but it also replaces other standard symbols except the Scatter symbol. All wins containing the Wild symbol are doubled.

The Wild and Scatter Symbols

The Wild symbol is the trigger for the Slide-A-Wild feature. This entails the player outlining one of the reels by the special slider before every spin. Wild symbol would appear in stripes at this reel and also increase the payoffs by the combinations by the additional multiplier.

The Scatter symbol can appear anywhere on the reels. More than two scatters are rewarded with up to 100 coins. Three and more Scatter symbols trigger fifteen free spins, during which the betting levels of the activating round are retained. 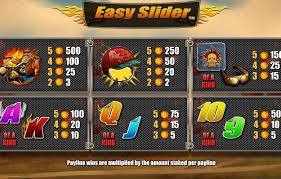 All the payoffs are doubled during the free spins, including the combinations with Wild at the selected reel. Consequently, in case the fifth reel is activated by Slide-A-Wild and Wild symbol, participating in combination, would be dropped out there, the winning is calculated by the additional multiplier x12.

Any win on Easy Slider can be gambled by clicking the ‘Gamble’ button underneath the reels. Players can double or quadruple any winnings correctly predicting whether the next playing card drawn is the right colour or suit. This adds variation immediately as winnings can be increased substantially.

When playing Easy Slider, players on Android real money slots app should remember that the rewards for the slider position are proportional to the real number. This means there is no real benefit in leaving it on reel two for example and thinking this will have better odds. Slots play is a game of chance, and this feature should be treated as such. This is one of the aspects of the game to simply appreciate, same as for the rock and roll soundtrack to this game which compliments the graphics and animations very well.